The pictures below are of the old church which was built in 1838 some years after Catholic Emancipation. It served as the parish church until it was refurbished in 1968-1970 by the then parish priest, Fr. Peter Loftus. P.P. Two wings of the original building were retained and incorporated into the existing structure. Some artefacts from the old church are in situ behind the present building. It is hoped that these will be restored and preserved for future generations. The original altar was removed and a wooden structure was put in its place. The altar is orienteered so that it can be seen from each aisle. The present situation is far from satisfactory as for most of the time the priest has his back to the two thirds of the congregation. Major repairs are needed to the structure of the present building and with this in mind plans are being considered as to how best the present structure can be altered in order to make it more inclusive. 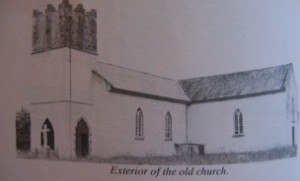 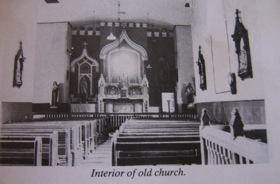 Baptismal Font The picture below is of the baptismal font from the old church. There is also an unique style 17th century crucifix in safe storage. It is hoped to restore both artifacts to their former place in the refurbished church. 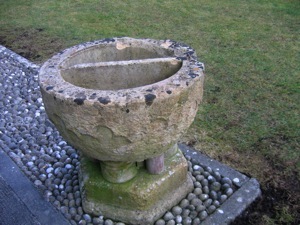 Oratory A small Oratory seen at the right was constructed between a side aisle and the bell tower during the early 1990’s As well as an oratory it serves as a multi-functional room for Eucharistic adoration, as a meeting room for parish use and an extension for an overflow of the congregation whenever it is needed. 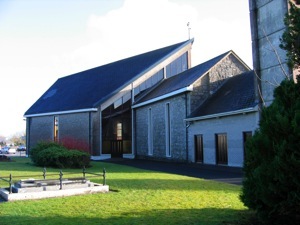 Interior A view of the altar

Church Art Lackagh Church is fortunate in having a stain glass window situated to the left of the altar. The picture depicts the Holy Family and is an example of late 20th century church art. It was commissioned by the late Canon Cummins on behalf of his family. 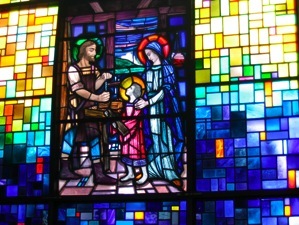